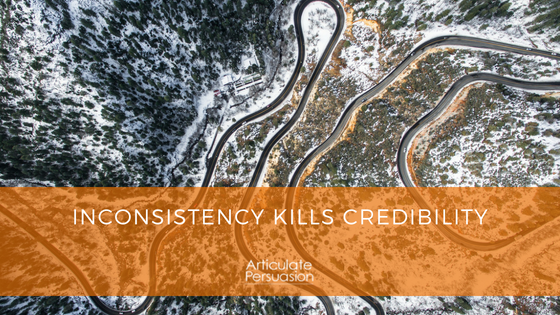 Photo by Denys Nevozhai on Unsplash

Credibility is the most important thing we can cultivate as professionals. It is why we are able to build a network, get promoted and lead others. Authenticity is at the heart of a strong, confident presence, which is the foundation of credibility. However, most people feel the need to put on a front when they are at work. I had a colleague once who had one voice for co-workers and employees and another for board members. The voice was lower and I always thought sounded odd. The reality is that it was odd, because it was inauthentic. I realized then that the deeper voice was her way of trying to mask any insecurities. She wanted to be seen as strong and in command. Unfortunately, for those of us in the office, it had the opposite effect. We thought ‘if she is putting on a front for them, is she putting on a front for us too?’

There are thousands of little ways we can undermine ourselves by being inconsistent. However, the cure is simple – Authenticity.  If you are authentic at all times, you won’t be inconsistent. That doesn’t mean you share every side of yourself with everyone. It simply means you aren’t trying to be ‘like’ anyone else. You lead with your best self. That establishes and reinforces credibility.

What personally identifiable information is collected from you through the website, how it is used and with whom it may be shared.
• What choices are available to you regarding the use of your data.
• The security procedures in place to protect the misuse of your information.
• How you can correct any inaccuracies in the information.

NOTE: These settings will only apply to the browser and device you are currently using.